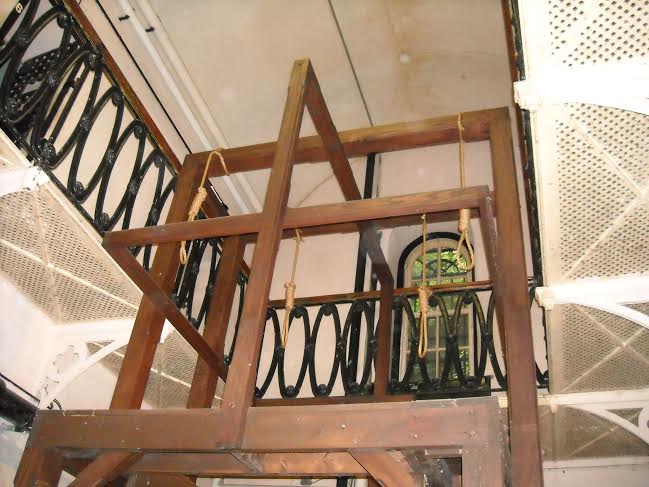 My sister Katie and her husband Brendan visited two different places this summer that made me envious:

1.) The Ernest Hemingway House in Key West, Florida (and they saw the six-toed cats that live there).

Since Halloween is coming, I want to talk about the Old Jail Museum. This building at one time incarcerated prisoners bound for the gallows. It is well-known for a certain “Bloody Handprint” on a cell wall.

I first read about the Bloody Handprint in a paperback of ghost stories with a screaming skull on its cover. I suspect that my mom strongly disliked the book. I purchased it with my allowance money from a Scholastic Book Club flier in the sixth grade. My sisters also read the book. We later told and retold the story about the Bloody Handprint around many a campfire as we toasted marshmellows and made s’mores.

To paraphrase the story, in the 1800’s Irish immigrants to Pennsylvania struck and protested their working conditions as coal miners. They joined a secret society called the Molly Maguires (the Mollies). The mine owners hired the Pinkerton Detective Agency to bust the union and the Mollies. The Pinkertons planted a mole inside the Mollies, and arrested several of its alleged members. The authorities tried and hung several alleged members of the Mollies for murder in Jim Thorpe, PA on June 21, 1877. One of the men, Alexander Campbell, slapped his handprint on the wall of his jail cell and swore his innocence shortly before his execution.

This jail cell wall still has the handprint. In the version of the story that I read, this wall has been painted and re-plastered, and the handprint keeps reappearing.

Katie and Brendan got to see the Bloody Handprint! Unfortunately, the museum does not allow visitors to take photos of it, but they conveniently sell their own photos of it in their gift shop.

Katie shared with me the photos that she did take inside the museum. Do you see the orbs in the photo of the gallows? It gave her goosebumps.

In this image, Brendan peers inside a jail cell that held Irish coal miners prior to their execution. As you will note by his hat, Brendan roots for the Phillies. However, we can forgive him for this since he is a good brother-in-law. 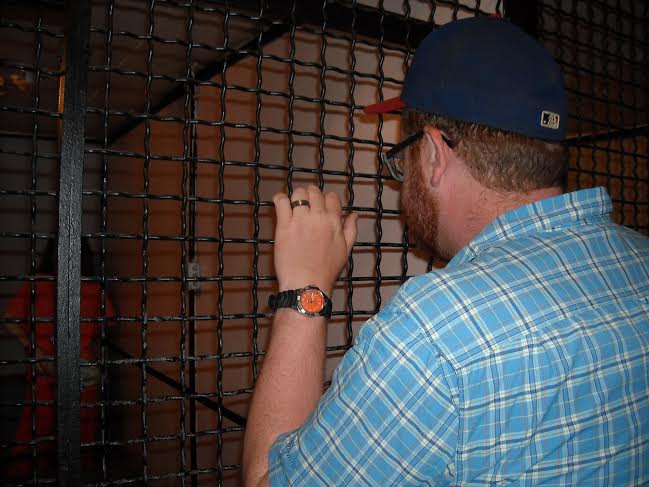 Update: October 2018: Hi, this is Jenny. Come visit my new blog, The Parnassus Pen, at www.parnassuspen.com.