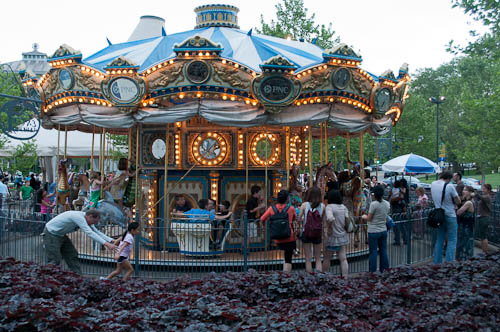 Here is a photo of the carousel at Schenley Plaza.

Schenley Plaza, Schenley Park, and all of the other Schenley stuff in Pittsburgh is named after Mary Schenley. Mrs. Schenley donated a large amount of prime real estate for use by the residents of Pittsburgh in the 1800’s. Land that she inherited from her grandfather, General James O’Hara, who was George Washington’s quartermaster.

James O’Hara – and therefore also Mary Schenley – had Catholic ancestors in Ireland. O’Hara donated to both the Catholic and the Presbyterian churches in Pittsburgh.

I learned this by reading an out-of-print book that I found in the Saint Vincent College library. The book was written by a devout Presbyterian (and New York Times bestselling author) from New Alexandria, PA.

The book is The King’s Orchard by Agnes Sligh Turnbull.

Sadly, this novel about James O’Hara doesn’t really explore O’Hara’s Irish Catholic roots. The story begins when O’Hara leaves his moneyed (part Catholic) family in Ireland and lands in Philadelphia. The first chapter mentions that O’Hara had attended a prestigious Catholic school in France.  Then the author changes the subject. The entire several-hundred page book mentions about five times that O’Hara’s father was a Catholic who let his Protestant wife raise their son. Each time, this was slipped into dialogue about something else.

These few references led me to a Google search. Said search confirmed that James O’Hara did have a Catholic father, and that he donated to the Catholic Church in Pittsburgh. However, O’Hara was also extremely generous to the early Presbyterian Church in Pittsburgh, which The King’s Orchard DOES mention in a fair amount of detail.

I’m not shocked that Turnbull glossed over the whole Catholic thing. This book came out in 1963.

I recognize how privileged I am. Very, very privileged. That I can blog about this today, on Saint Patrick’s Day 2016.