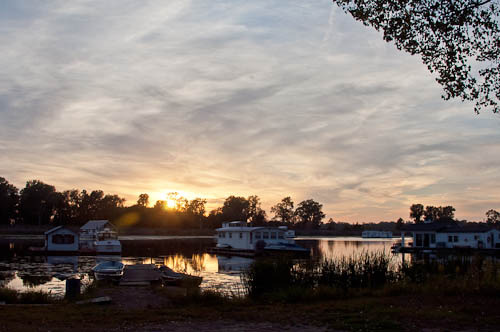 I was nine the first time that I saw a great lake. Lake Erie. We went to Presque Isle State Park in Erie, Pennsylvania. I pretended it was the ocean because I had never been to the ocean.

On that trip, I saw a lady in a white dress run from the beach to a car along peninsula drive. A bride. I watched the sand kick up then sink as the car pulled away and vanished under an azure sky.

Or maybe not. Maybe I thought, “What a lovely place to get married,” and then I later merged the daydream with a bride that I saw elsewhere. But I like thinking that I really saw this. And I have seen so many brides at so many parks – I even saw a bride inside the Tower of London, heading to her wedding in the chapel where Anne Boleyn lies – that I believe this Presque Isle bride existed as I remember her. She must. And I think about her every time I visit that beach. I hope they still have a beautiful life together.

I didn’t have family in Erie back then, but I do now. So does Jonathan. When we come to Erie for family events, we also visit Presque Isle.

At the top are the houseboats of Presque Isle’s Horseshoe Pond. I took this photo last autumn. (I used the rule of sunny 16.) The houseboat’s owners do sleep there, though they don’t live in the boats year-round. If I had a houseboat, I would blog the tarnation out of my adventures there.

We drove past the houseboats on our way to and from the North Pier. We stopped at the pier to watch the boat traffic between Presque Isle Bay (Erie’s main bay) and the open lake. Jonathan walked towards the pier’s end. The lighthouse at the end is the Erie Harbor North Pier Light. I set my chair on the pier and watched a family fish. A woman pushed per bicycle up onto the pier and ran over to me.

“Did the Niagara pass here yet?”

I said, “No. I didn’t know the Niagara was supposed to pass.”

The U.S. Brig Niagara is a replica Oliver Hazard Perry’s ship from the Battle of Lake Erie during the War of 1812. Its home-port is at the City of Erie, on the bay. I knew that. I didn’t know that on that particular afternoon, the Niagara was heading from the open lake back to port. Under full sail.

Then I got a text from Jonathan: “GET YOUR CAMERA READY. THE NIAGARA IS COMING!”

Jonathan took this photo as the Niagara headed towards the pier. 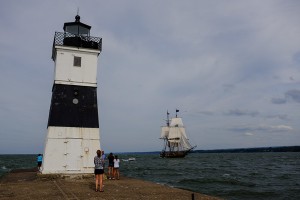 The Niagara passed the North Pier under full sail. 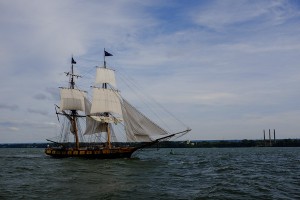 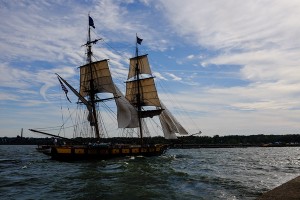 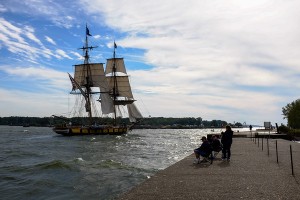 When it reached the bay, its cannon fired.

Seagulls rose up from the water and flew past the brig. I took this photo. 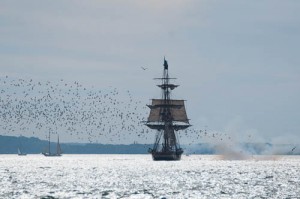 This is Presque Isle.