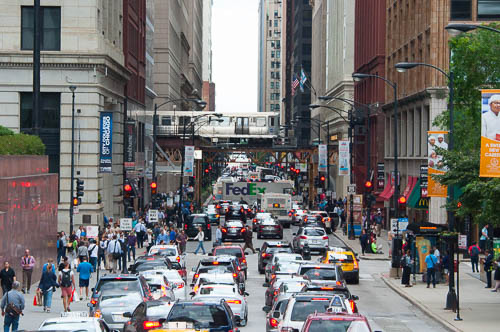 He came into the possession of his own new-to-him camera.  So, Jonathan and I both have “new” cameras. I hope that the rain holds off this coming Saturday, because I intend to try out my own “new” camera at the New Kensington Corridor of Innovation Art & Music Festival this Saturday, September 16. I can’t pass up a free music festival. Even better, the parking is free on Saturday too!

So, this Saturday’s festival is even better than the Three Rivers Arts Festival (TRAF) in Pittsburgh. We pay $20 to park every time that we go to TRAF.

Inspired by this, and also by the blog post that I wrote on the Bloser’s Jewelers building, I went through all of the photos that Jonathan took of downtown New Kensington architecture in 2009. New Ken had the nickname of “Little Chicago” for decades. I know the nefarious reason for this. I also know that many of the downtown New Ken buildings are dated shortly after Chicago burned down in 1871 and was rebuilt. So, I could see a visitor from that time period comparing the business district of little New Kensington with that of Chicago.

And I just realized that I never wrote down all of my thoughts on the architecture boat tour that I took of Chicago this past June. As I blogged previously, Jonathan went to Chicago for a work conference, and I followed him.

We stayed at the conference hotel, which was at one end of the Magnificent Mile. It was also across the street from the Chicago River.

(I keep mixing up the terms “Magnificent Mile” and “Miracle Mile.” The Magnificent Mile (or Mag Mile) is a shopping district in downtown Chicago. The Miracle Mile is a congested highway lined with strip malls leading up to the Pennsylvania Turnpike exit in Monroeville.)

This was my first “real” trip to Chicago. I transferred planes before at O’Hare, and I transferred trains before at Chicago Union Station. Years ago during an Amtrak layover, Jonathan and I took a taxi to Gino’s Pizza, and I saw the Willis Tower (former Sears Tower) from afar. But that was all.

I didn’t have a set travel itinerary because those aren’t really my thing. We walked along the Chicago River during our first evening on the town, and I noticed that multiple companies run architecture boat tours up and down said river.

On my first morning in Chicago, I skimmed Yelp reviews of the three boat tour companies that had docks close to our hotel. All three companies had good reviews, and they had no large difference in ticket prices. The Chicago’s First Lady Cruises from the Chicago Architecture Foundation (CAF) seemed to have best reputation online.

The reviews noted that the CAF tours include very detailed information. Now, I like history trivia and I like folklore. I know very little about modern architecture, though. I nearly avoided the CAF tour because I was concerned that it would be full of minutiae and architectural lingo. And that an overwhelmed and frustrated Jenny would disembark the tour boat. In the end, I chose the CAF tour because its ticket booth and docks were the closest to our hotel.

So I walked up to the booth, purchased a ticket, and thirty minutes later I sat on a boat.

(Note: this was NOT a holiday or a peak tourist day. It was just a random weekday in late June. This is how I got away with walking up and buying a ticket for the next scheduled tour.)

The CAF is actually a non-profit organization and its tour guides are volunteers. The CAF does not permit its guides to accept tips. My tour guide revealed that he is actually a psychologist, and that he guides tours as a hobby solely due to his love of architecture.

The CAF’s boat partner is Chicago’s First Lady Cruises. The boat that I rode had a bottom enclosed deck and an open top deck.

The bottom deck included a cash bar and restrooms.

The top deck had no roof, and if you wanted to actually see the buildings you needed to sit on the top deck. I hope that this goes without saying, but I strongly recommend that anybody on these boat tours – especially on a sunny day – wear a hat. I wore my wide brimmed Tilley hat that I always wear at the lake. The guide actually came up to me to compliment my hat, because he wore an identical Tilley!

Here’s the only photo that I took of the Chicago’s First Lady boat that I rode up and down the Chicago River:

The boat ride itself was 1.5 hours.

Several times, our guide referenced the book “The Devil in the White City: Murder, Magic, and Madness at the Fair that Changed America” by Erik Larson. Some of the buildings on this tour were built in the years leading up to the 1893 World’s Fair, which is also the time frame in which the serial killer H.H. Holmes “worked” in Chicago. So, this book might end up on my winter reading list.

Here’s the Wrigley Building, which helped to earn Chicago the moniker of “White City,” according to our guide. I obviously didn’t take this photo on my morning boat tour. I came back to the river later that evening for this shot: 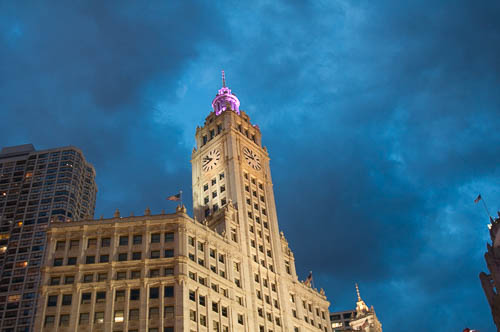 Now, one thing to note: since this is a boat tour on the Chicago River, the tour obviously only includes buildings seen from the river. So, for instance, we didn’t see the Drake Hotel on our river boat trip. I had to ride on a bus tour to see the Drake.

Now, we did see several well-known landmarks, such as the Wrigley Building, that were built in the decades immediately after the 1871 fire. I was honestly surprised that we didn’t see MORE of these. Then I learned that downtown Chicago developers constantly tear down buildings and replace them with taller buildings.

(Now, there’s a folk / blues group in Pittsburgh by the name of Grant Street Grifters. Jonathan went to high school with one of the musicians, and then he went to college with the other member of this duo. Anyway, the Grant Street Grifters have a song titled “Build It Bigger.” I wonder if Chicago’s attitude toward its skyscrapers inspired this song.) 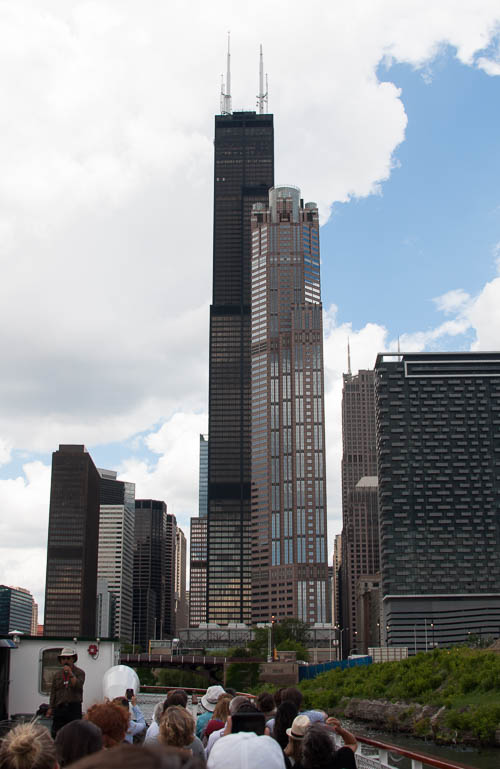 Since the CAF website has a bit of information about the buildings, I want to talk now about the river.

I grew up in a small town on top of a ridge in the Laurel Highlands. The town reservoir was out 5 miles out of town. Each day in the summer, my sisters and I rode our bikes several miles past a bunch of farms so that we could play in a creek. I didn’t fully grasp the devastation of floods.  I’m too young to remember the days before EPA regulations when all of the rivers of Rust Belt river towns were stinking polluted messes. (Keep up the good work, EPA!) I envied anyone who lived on a waterfront.

Then I ended up living and working on a beautiful cleaned-up Allegheny River. When I first came to Pittsburgh, Jonathan and I spent hours on Pittsburgh’s own riverside trails.

So, of course I sat on the boat and admired Chicago’s fancy new riverwalk and its waterfront companies with outdoor waterfront picnics tables for employee lunches.

I first realized that the Chicago River is a tourist destination when I read a USA Today story several years ago that the tourists rent kayaks and canoes and then paddle out into the middle of the shipping channel, in front of large commercial boats. And in fact, I did see a lot of recreational boaters, both on this tour and then later when I walked along the river.

Now we just need to get a riverfront park into New Kensington, along the Allegheny. And maybe also a riverwalk. So that New Ken can once again be “Little Chicago.”

Postscript from Jenny, April 21, 2019: After I wrote this blog post, I started a new blog: The Parnassus Pen at www.parnassuspen.com. This new blog focuses on: “Places and Their People, History, and Lore.”

Check out my blog post on the Parnassus Pen about Juliette Gordon Low (founder of the Girl Scouts of the U.S.A.) and her Kinzie family connection to the Massacre / Battle of Fort Dearborn in Chicago in 1812. 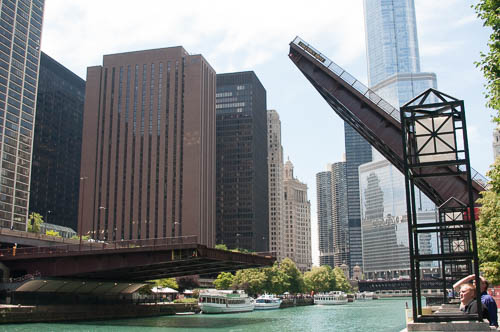