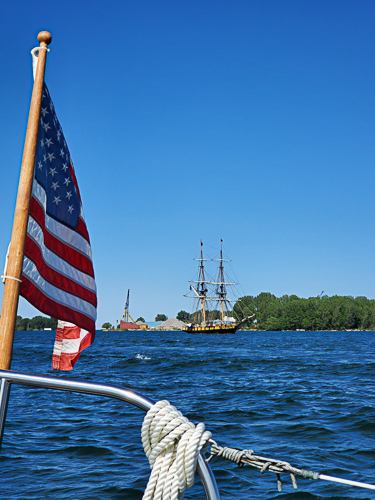 This past weekend, I went up solo to move Pinniped, hoping to find a few of our D-dock neighbors willing to give me a hand getting out and maybe getting tied up in our new slip. I found the couple on S/V Just Us walking down the dock as I arrived, and they were more than happy to lend some time helping me to get her moved. After checking out our choices on C-dock and picking our new slip, I got the engine warmed up, prepared the docklines so that they were all set up to come on board, and grabbed the Just Us crew for some assistance.

It is worth taking a moment here to say something about sailboats, especially designs like Pinniped, that have large rudders hung behind substantial keels (Pinniped, being a Ted Brewer design, has a “Brewer Bite” keel, which has a cut- out in front of the rudder skeg that makes it function more like a fin keel; though it isn’t as hard to turn as a full-keel, it is still a substantial keel and a substantial resistance to overcome when turning). Since the propeller is fixed in position, the only way to turn the boat is with the rudder. The rudder is only functional when it has enough water passing over it (in other words, when the boat is going fast enough). The term for this is “having way”. Until the boat has way, it is basically going to go wherever it wants, and current and wind can have significant effect on where the boat is going. Most sailboats will have way in forward at fairly low speeds. Pinniped’s rudder is well-designed, and she has way when merely drifting forward. Unfortunately, most sailboats, but especially older sailboats, need more way to get steering in reverse. Due to other hydraulic physics (like prop walk), most sailboats will also turn better in one direction than another in reverse, and some will simply turn only in one direction in reverse until a lot of speed is on.

Pinniped is able to turn to port in reverse at fairly low speeds. Turning to starboard in reverse requires that the boat is moving >2.5kts., and that’s pretty fast in a crowded marina. Since we dock bow-in, we have to reverse to leave the slip. Last time we were out, I was able to back just about straight across the fairway behind us, then a couple of short bursts in forward with the tiller turned sharply got us rotated to face out of the fairway, and off we went. This time, of course, we were catching a bit of wind and the bow was getting pushed in the wrong direction. At this moment, the Just Us crew had a great suggestion, that I simply hadn’t thought of while I was trying to figure out how to fix the problem: Just back out of the fairway to clear water. Genius! That was to port, so I had steering, and the maneuver was quick and easy.

The Just Us crew met me over at our new slip on C-dock and they and some of our new dock neighbors helped me to get tied up there. I spent a bit of time getting the boat into a good position and getting docklines set, moving a few things from our old slip (extra bumpers, hose, etc.), and getting the rest of the stuff I had in the car loaded on board.

There was wind. I could feel it. Pinniped could feel it. We couldn’t stay here, tied up to a dock. No, we had to go out. I was by myself. I had never done this on my own, but there was no better time. I had more confidence moving the boat in the marina. I was in a slip with no current neighbor, so if I drifted sideways, the only thing getting bumped was my pride. We had to go out. I made a drink for myself, got the handheld GPS mounted, sail covers removed, big hatches secured, sheets ready, halyards ready, engine running. Dock lines slipped. Start to back out. I have steering, All is well.

Boat stops moving. Um, wut? Engine still running. Prop generating thrust. It feels like we’re stuck. I pull back into the slip and throw on a temporary spring to keep us from drifting too far away and go forward to see what’s up. Was I caught on something that may have been left on the dock that I didn’t see? Nope. None of that. I had slipped all of the docklines except for the starboard bow line, and the angle of the line meant I couldn’t see it from the cockpit. Ugh. OK, slip the line, release my spring line, let’s try this again….

Motoring out into the bay, I started to pay more attention to the direction of the wind so that I could get Pinniped positioned head-to-wind to raise sail. I fetched the autopilot and tried to turn it on, but it wouldn’t activate. It didn’t even seem to have power. Ugh. Should I just motor for a bit? No, no, there is wind. That won’t do. OK, so we do it old-school, point the boat towards the wind, back off to dead slow forward thrust, and tie off the tiller to keep us mostly pointed in the right direction. I knew I’d need more time than a tied tiller would allow, but at least I got one sail up! I decided to start with the stays’l, since it was the easiest to raise, and would get me some control to hopefully make the main easier to raise.

Raising the stays’l caught some wind almost immediately, and we started to blow down. I needed us to point more weatherly to get the main up, so I climbed back to the cockpit, and realizing I might need more space, decided to make a loop so I’d have more room to weather. One can see the loop below in the area I circled and labeled “sails up.”

Going back foward, I was able to get the main up and tensioned, and then put a little more tension on the stays’l, and we were off! Time to shut down the engine and do a bit of sailing!

As one can see in the path trace, I started with a couple of tacks to windward, then turned downwind and had some nice broad reaches. Jibing a big boat is a lot like jibing a small boat, but the forces are a lot higher, so it requires some forethought. I was a little nervous on the first jibe, but by the third one, I was happy enough that I actually filmed it with the GoPro so I could watch it and review my own performance later.

The bay was not as busy as I thought it might be, but there were still interesting boats out and about. The Brig Niagara had been out for a sail in the lake, and was just coming back into the bay. She had fired off a cannon shot just a little before I took this photo. I saw online later that she was out with students for their last sail before she packed up to head out for this summer’s Tall Ships festival circuit in the Great Lakes. The Lettie G. Howard, a former fishing schooner, is also in town, and I believe will be staying at the Erie Maritime Museum in Niagara’s place until she returns for Tall Ships Erie. I also sailed next to the Victorian Princess sternwheeler for a bit, which seemed to make the passengers happy!

Between the two photos above, I heard on the radio that TowBoatUS was inbound to the bay towing a disabled sailboat. I was sad to see that it was S/V Just Us! They had some engine problems a couple of weeks ago, but everything seemed to be fine. They had motored out of the marina after helping get me moved. I still don’t know what happened, as they were gone by the time I got back in, but I felt bad that they helped me and then I ended up being the one having a good day on the water.

My drink was running low, and I was realizing that I had been in the sun for quite a while, and though I was drinking water, I wasn’t drinking enough. Being on my own on the bay, I was too nervous to duck below to fill up my drink, so I decided to head in. It had been a good few hours, anyway, and I was happy. I got the engine started so it could warm up while I took care of sails. I got the boat pointed mostly into the wind, tensioned the lazy jacks, dropped the stays’l, and then dropped the main. I left the halyards an absolute mess, but I wasn’t going to play with them out here with the boat just kind of going wherever at this point. Back to the tiller, untied it, throttled up, and motored back into the marina. Our new dock neighbors gave me a hand coming in, which was welcome. Boat tied up, plugged in, hatches open, and a really tall glass of ice-cold water, sitting in the cockpit, knowing that I just conquered four things that were making me nervous in the same day (leaving the slip on my own, sailing for the first time on Pinniped, sailing Pinniped on my own, and returning to the slip (mostly) on my own)… It was a great day. I missed my adventure buddy Jenny greatly, though, and I wish she had been there to share all these experiences with me. But I know she will, and I knew that she was having a good time with her sisters. All was right with the world. It was time to make some dinner and relax in the cockpit with some boat-cooked food (pork mince in a red curry sauce) and a book. 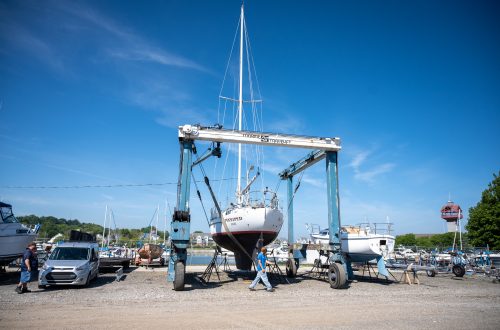 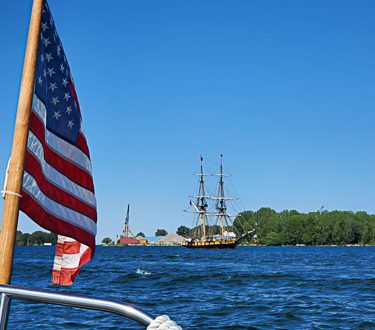 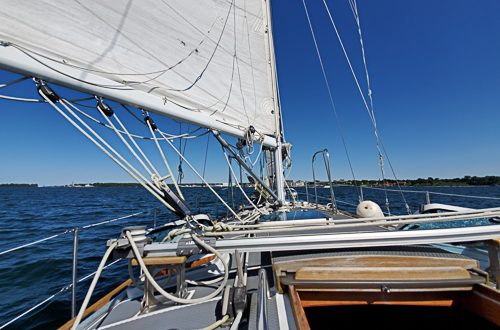